Please take a moment to fill out this survey on your gaming habits!

Die Spieler müssen Vorsicht vor den Sturmwolken bewahren, weil daraus nähmlich böse Kreaturen erscheinen. As players progress through each of the regions, the storm will become more aggressive. It can produce large waves of all kinds of Husks and other monsters during certain missions. Small purple vortexes as well as dark purple fog indicates where husks will come from during an event.

Many players enjoy "spawn camping", by simply standing near Husk spawns during Siege phases and killing them as they spawn. This is generally an effective strategy until the players reach late Plankerton and early Canny Valley as the Husks are generally manageable without traps until that point. Upon reaching Canny Valley, players quickly learn that spawn camping is no longer a viable strategy because at this point, some enemies are easily capable of killing Heroes in one to two hits, and the sheer volume of husks that are spawned can quickly overwhelm players.

Once entering Canny Valley it becomes increasingly necessary for players to utilize Traps to help whittle down the waves of husks before they reach the objective.

When a player dies, a small localized whirling vortex of the storm forms around them. The visual cue helps locate downed heroes. This vortex does not spawn husks, but it still adds risk to the interaction due to the dangers of obscured vision. Once a player is revived, this vortex disappears. 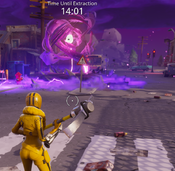 A Rift is a dangerous tear in the fabric of reality suspected to have been caused by the Storm. It is dangerous to Heroes if they venture too close. When near the Rift, it drains the Hero's energy. However if the Hero get's too close then it will begin to drain their life points. The Rift itself does not drain the player's stats fast enough to be directly dangerous. The danger of the Rift instead is that it makes the player vulnerable to nearby husks, as the energy drain may prevent them from using Abilities, and the shield drain makes it easier for husks to directly damage the player.

The Rift is the target of the Deliver the Bomb mission type. There are also several quests that include lore about the source and purpose of the Rift.

Shadow Orb is a side-quest usually found in caves. The objective is to kill the Mist-Monster to get a reward.

On August 29, 2017, Patch 1.5 introduced Mutant Storms, which are seen as purple storm vortexes on certain missions on the the mission select map. These missions apply modifiers to the players and husks in the mission, which may variously benefit or hurt the player.[1]